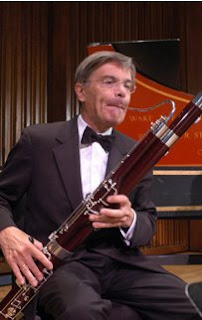 The bassoon is often associated with humor and whether that is just or unjust doesn’t matter, because even bassoonists seem to revel in the comical aspects of their chosen instrument. So, several bassoon pieces in the second half of the Chamber Music Northwest concert (July 21) at Catlin Gabel caused lots of chuckles. But the tongue-in-cheek quality of the bassoon music did not obscure the virtuosic performances by the bassoonists involved. Led by globe-trotting bassoon soloist Milan Turkovic, the bassoon numbers in Tuesday evening’s concert had an ample amount of buffoonery and were performed superbly.

The bassoon-laden bravura got off to a terrific start with Conradin Kreutzer’s “Der Todte Fagott” (“The Dead Bassoon”), a humorous piece for baritone, bassoon, and piano. Kreutzer (1780-1849) apparently wrote at least 50 operas, and “Der Todte Fagott” has a lot of operatic flavor. The story tells the sound of a bassoon causes a father to murder his daughter, the daughter’s zither-playing suitor, and the suitor’s bassoon-tooting sidekick.

In this performance, baritone Randall Scarlata collaborated wonderfully with bassoonist Milan Turkovic, and pianist Thomas Sauer to milk every drop of humor from this piece. Turkovic’s did marvelous word painting with his bassoon, from imitating a galloping horse and to creating the sound of a ghost. The bassoon gets the last word by taking revenge on the father, but I wonder what happened to the zither.

Next came “Meeelaan” for Bassoon and String Quartet, which was written by Wynton Marsalis for Turkovic. The Miró Quartet (violinists Daniel Ching and Tereza Stanislavk, violist John Largess, and cellist Joshua Gindele) joined Turkovic to create the bluesy/jazzy meanderings of this piece, which has three movements entitled Blues, Tango, and Be-Bop. I really liked how Turkovic could blow two or more notes at the same time and his riffs while the strings suspended the sound.

“Meeelaan” was followed by four piece for bassoon quartet. The battery of bassoons consisted of Turkovic, Julie Feves, Mark Eubanks, and Keith Buncke. It should be noted that Buncke at age 15 is somewhat of a bassoon prodigy. He will be attending Aspen this summer and continue his studies at Interlachen.

The foursome began with Peter Schickele’s “Last Tango in Bayreuth,” a sly and funny piece that slides between themes from Wagner’s “Tristan und Isolde” and the Act III Prelude to “Lohengrin.” The leisurely tempo and lounge sound created an intoxicatingly humorous mood that would’ve lingered into next week if it wasn’t for the next piece, Prokofiev’s “Scherzo Humoristique.” The dexterity and supple playing of quartet was very impressive as the quartet negotiated fast passage. At one point, the clicking of multiple keys, which added a tap-dance effect to the overall sound.

The quartet also performed Pat Ballard’s “Mr. Sandman” in an arrangement by Georg ter Voert, Sr. and Duke Ellington and Juan Tizol’s “Caravan” in an arrangement by Mark Eubanks. I especially enjoyed the chime-like and schmaltzy atmosphere of “Mr. Sandman” and the witty quality of “Caravan” in which Eubanks fitted in asides to “Beethoven’s 9th,” “Bolero,” and, I think, “Scheherazade” and probably a couple of other pieces.

In first half the concert, Bach’s Cantata No. 82,”Ich habe genug” provided a sharp contrast in mood and content with the bassoon bravura in the second half. The text of this piece tells the thoughts of someone who is tired of the world and longs for death in Christ. I would’ve liked to have heard more of Scarlata’s expressive and smooth baritone, but the instrumentalists (the Miró Quartet, oboist Allan Vogel, double bassist Curtis Daily, and harpsichordist John Gibbons) couldn’t restrain their volume. Their sound – especially Vogel’s rich oboe – was drop-dead gorgeous, but less of it would’ve helped us to get more involved in Scarlata’s beautiful singing.

The Miró Quartet opened the concert with a polished performance of Haydn’s String Quartet in F Major (OP. 74, No. 2). The grace and elegance of the music came to the forefront through the ensemble’s deft playing. In particular, the quick pace of the last movement nicely exposed the nimbleness of each musician – led by sweet sound from Ching’s violin.
Posted by James Bash at 3:33 PM

I LOVE the bassoon and bassoon quartets- what incredibly glorious sounds.

There's a terrific work by Ennio Morricone entitled "Totem Secundo" for 5 bassoons and 2 contra bassoons that deserves a Portland airing.

Anyone wanna play AND help pony up the cash for the players? I have the score and recording.