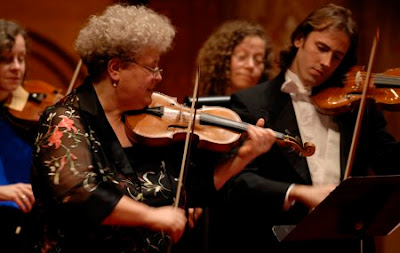 Oregon Bach Festival audiences were treated to a very rare treat on Monday, June 29th at the First United Methodist Church in Portland. The Portland Baroque Orchestra, one of the nation's premier early music orchestras and a guest ensemble at this year's festival, presented all six of Bach's famous Brandenburg Concertos under the sterling direction of Monica Huggett (who did triple duty as violinist and violist as well.)

These works were composed over a ten-year span while Bach was still a young man, and presented to a music-loving (though ultimately ungrateful) prince, the Margrave of Brandenburg. They represent Bach's foray into the Italian concerto style, and like so many of his efforts they are uniquely his own and yet stand as one of the crowning achievements of the genre. This review shall present them in the order in which they were performed at this concert.

Right from the start, and continuing throughout the night, Huggett set positively brisk tempos, and these lent the works an air of excitement and forward momentum. The opening Allegro felt like it was played by a German festival band, what with this work being in some ways the most 'un-concerto-like' of them all in that there is very little in the way of clearly defined separation between the concertante (soloists) and ripieno (supporting orchestra.) The horns, as Bach no doubt intended, set up a somewhat awkward honking that stood at odds with the smooth texture of the tutti. Kelley and Avril played well, with a minimum of the warbling and quavering which seem to be a natural part of the old valveless brass instruments. The second movement (Adagio) was delectable, with Moore and Nagy engaging in a skillful badinage between the oboe and the feisty violino piccolo, tuned a third higher than the regular violin. In the third movement this small instrument was unfortunately too-often drowned out (as were the brass and winds by the fearsome choir of strings in the first.)

This first concerto stands alone in having four movements, and the fourth presented the most delightful moments of this first concerto: a main menuet theme repeated three times, separated by three sections in which the horns and oboes played alone their own menuets and a Polacca while the ripieno stood silent. The brass and winds were superb in their presentation of these savory, dancing vignettes, while the ripieno varied the da capo menuet dynamically upon each of its returns.

The most virtuosic display in a long evening of such displays undoubtedly belonged to Kleiner, who in the first movement executed the extremely difficult harpsichord solo with crystalline clarity. (Huggett's performance in the Fourth Concerto rivaled Kleiner in this respect.) He segued seamlessly in and out of the dual roles of continuo and soloist, and when he reached the long cadenza all in the room, orchestra and audience alike, remained in awed, respectful silence while Kleiner absolutely tore up the keyboard, a wistful smile of amusement on his face as he played the triplet passages with fierce rapidity and yet cautious delicacy, mindful of the delicate filigree that Bach had provided.

The second movement, marked Affetuoso, was splendid, structurally simple and yet full of the sighing, weeping baroque pathos that is a hallmark of so many of the slow movements of Bach's works. Huggett, See and Kleiner played this trio with marked clarity, infusing it with tender, sombre sentiments without becoming maudlin or overly slow.

The opening movement of this concerto, again with no real concertante and ripieno sections, rather featuring three trios of strings and continuo, was perhaps the most perfectly executed movement of the entire evening. It was thrilling to hear live a performance that was on par with any of the best recordings that I have ever heard of this work. To use a sports analogy, everyone in this group was 'in the zone,' and the relatively straightforward melodic structure that Bach employs was tossed off from one trio group to the next, constantly moving, always perfectly deployed. The ritornello, or refrain, to which Bach keeps returning over and over never became tiresome--in part because of the breathless tempo that Huggett employed. Each group pushed it forward, and everyone played fearlessly--individually, as a trio, and in aggregate.

In the second movement Huggett engaged a Corelli-esque singing tone in her playing, and the third movement saw a return to the lightning-quick prestissimo of the first. It is hard to imagine this work played any faster than the PBO took it this night, and yet due to their countless combined years of skill and dedication there was no sacrifice of accuracy or interpretation. Concerto No. 3 was perfect. 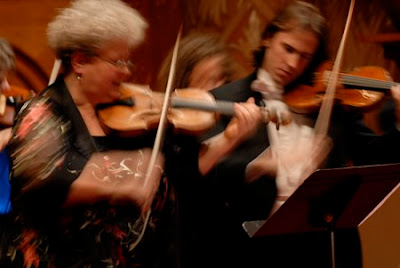 The only real intonation problems of the evening occured as this work opened the second half. It took a dozen bars or so for the group to settle in, both in terms of synchronicity and pitch center. When it did however, the rich, low sonority, aided by the violone and pair of violas da gamba in the continuo, lent this work its uniquely lush character: gallant and philosophically almost post-baroque, especially in the third movement despite the archaic strings for which it was scored. Huggett and Gun Pich really communicated with one another admirably after the slow start, and by and large this concerto was presented with exceptional unity by the small string band.

In this concerto, arguably the most popular of the group, Bach most closely adheres to the concerto grosso style--that is, a clearly defined concertante that is distinctly separate from a supporting orchestral cast. And what a concertante it is: four disparate instruments forming a group that could rightly stand alone without the backing of the ripieno--in fact it is thought that the music for the concertante was originally written as a stand-alone chamber sonata for those instruments.

The nobility, complexity and virtuosity of this concerto can hardly be overstated. That great nineteenth-century Bach scholar Philipp Spitta rhapsodized thusly about the opening movement: "...How it goes past like a troop of youthful knights with gleaming eyes and waving crests! One [concertante instrument] begins a joyful song which echoes through the tree-tops in the forest; a second and a third take it up, and their comrades chime in in chorus...anon it is heard for an instant, and then wafted away by the wind and drowned by the fluttering of the leaves."

The blend in the concertante was warm and mellifluous, and unlike portions of the first concerto where the horns and winds were sometimes drowned by the strings, the soloists stood apart and there was no problem distinguishing them from the group. Even the recorder, so easily subsumed, was by and large lucid and easily heard. However, at least at the start this movement was the only part of the evening where the tempo seemed to pose somewhat of a problem, as occasionally the soloists seemed to be in a hurry to catch up.

The second movement, a dirge-like sonata a tre for the concertante (minus trumpet) left naked the soloists, demanding of them a scaled down sensibility, a focus drastically narrowed from that required by the rollicking introductory movement, and they responded with the artistry one would expect of this group. The third movement again returned to a blistering tempo, and Few managed a fiendishly difficult part for a fiendishly difficult instrument with admirable grace.

This concerto was very fitting as the grand finale, and it allowed Huggett to shine in a demanding violin solo that approaches any of the ferociously difficult concertante written by the great concertoist (himself a masterfully adept violinst) Antonio Vivaldi. Huggett displayed the expertly channeled ferocity and daring showmanship that is her trademark style, fitting for one who considers great rock 'n roll guitarists among her foremost musical idols. The recorders played beautifully; a finespun, pastel duo, but they were unfortunately too-often swallowed by the ripieno. I don't know how much of this might be attributed to the vastness of the sanctuary at FUMC; I noticed no such problem with these same works in the very different acoustic space in the PBO's two-concert presentation at First Baptist last year.
During the finale Hugget left everything on the floor. In the spirit of Spitta's fantasy, I might say that like Euterpe Huggett impelled her instrument to call out heroically each time the ritornello appeared--sallying forth as though a daughter of Boudicca, leading the throng back into the fray for rally after rally after rally with unflagging leadership and razor-sharp determination.

The thorough professionalism and informed artistry demonstrated by the soloists and ripieno in all their various combinations throughout the evening were very impressive. The daring, the brashness that came to the fore all throughout this presentation of some of the most difficult works in the orchestral baroque repertoire left in this reviewer nothing but the greatest respect for these rarest of performers, an admiration and a local boy's pride for the beauty and wonder that the Oregon Bach Festival and the Portland Baroque Orchestra bring to the world.

Yes Monica Huggett is the rock star of Baroque violinists. In that last set of the Brandenburgs she did something on her violin that should be on YouTube. You would have to see it to believe it. It was some kind of ricochet technique, but not entirely ricochet.