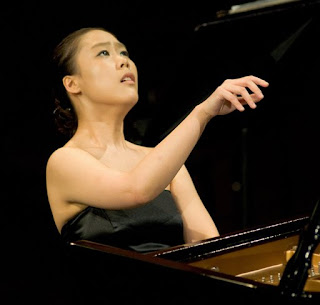 Yeol Eum Son, silver medalist at the 2009 Van Cliburn Competition, made a strong case for herself with her recital for the Portland Piano International Festival on Sunday afternoon (July 12) at the Wood Forestry Center. Son’s playing showed a lot of thought and plenty of spontaneity as well in a program that consisted of works by Robert Schuman, Mason Bates, Franz Liszt, and Frédéric Chopin.

In particular, Son’s performance of all 14 of Chopin’s Waltzes, during the second half of the concert, was very impressive, because each waltz stood out individually yet together they formed an interwoven tapestry. Son found the wistful melancholy that pervades some of the waltzes, but never went overboard. She also revealed the joyful sentiment in many of the waltzes yet kept that sentiment inbounds. She seemed to have an innate sense as to when to pull back the volume and the tempo, and that kept the audience fully engaged. After loud and sustained applause, Son returned to play the “Liebesleid” by Kreisler/Rachmaninoff as an encore.

Son also showed exceptional artistry with “Spanish Rhapsody.” She poured tons of emotion into this piece and there were moments in which her playing almost became ferocious. The results were spectacular and lots of cheering ensued after the piece came to its glorious end.

I also enjoyed Son’s playing of the short and almost jazzy “White Lies for Lomax” by Mason Bates. I had never heard this piece before, yet it is immediately accessible with a light rhythm and a series of notes that percolate like coffee to the top.

Son began her recital with Schumann’s “Fantasiestücke” (“Fantasy Pieces”), and she succeeded in drawing out the contrasting moods in some of the pieces. But, to my ears, they needed a little more shaping so that the work as a whole would have more of an arc.

Liebeslied! So that's what it was!

I should have mentioned that I agree with your review almost to the word. It was a delightful recital and she displayed her very impressive talents in a way we were all able to appreciate. She is a very composed young lady and it is hard to imagine that she does not have a fine career ahead of her. I would love to hear her in the concerto repertoire - Tschaikovsky and Rachmaninoff in particular. Mozart too, perhaps.