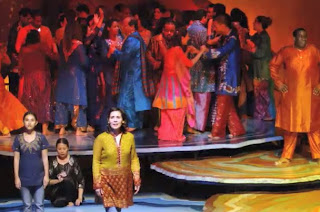 One of the loudest splashes at this year’s Mostly Mozart Festival (now in its 43rd year) was made with “A Flowering Tree,” an opera written by John Adams as a commission in 2006 by Lincoln Center for the 250th anniversary of Mozart’s birth. Originally premiered at the New Crowned Hope festival in Vienna, Austria, this production of “A Flowering Tree” took place at the Rose Theater (in the Time Warner Center). I attended the performance on Friday, August 14th and was very impressed with the engaging new music that Adams created and the exciting performances by the principals and the chorus.

Drawing on a story from India that dates back at least 2000 years, “A Flowering Tree” tells how a young woman , Kumudha, wants to support her mother and sister because they are facing financial hardship. The Kumdha does this by using a certain ritual that transforms her every night into a flowering tree. Her sister harvests the petals from the tree and then helps to transform the tree into Kumudha again. The family sells the petals at the market every day, and all goes well until a young prince see the transformation process. A love story ensues, but not without misunderstanding, envy, and hardship – all of which cause the prince and Kumudha a lot of suffering until they are reunited at the end of the story.

The narrator, sung superbly by baritone Sanford Sylvan, of this tale plays a very important role, because “A Flowering Tree” only has two other principal singers plus a chorus that takes on multiple roles. The warmth and empathy in Sylvan’s voice enhanced the storytelling and complimented the top-tier performances of soprano Jessica Rivera as Kumudha and tenor Russell Thomas in the role of the Prince. Rivera’s singing conquered a very wide range of notes and emotions with conviction, depth, and passion. Thomas sang with the urgency and fervor of a young man who is deeply in love.

Other stars in this production were the members of Schola Cantorum de Venezuela, which conveyed several roles in the story, such as the prince’s sister. This chorus, singing some passages in English and others in Spanish, displayed a thrilling sound. Adams threw a lot of shifting meters and rhythmic complexities at them, but they made it all look completely natural. Almost astounding was an extended section when they sang on off beats. It was as if the entire chorus had Tourette's syndrome, yet it wasn’t improvised. Rather it was all carefully scripted by Adams.

Part of the story was related by three dancers: Rusini Sidi, Eko Supriyanto, and Astri Kusuma Wardani, which worked very well for the most part. They represented different characters in the tale, and helped to move the narrative forward. In the second act, there was a point in which the Prince sang to one of the dancers who represented Kumudha even though Kumudha was standing next to the dancer. That seemed confusing to me – or I misread the situation altogether.

Adams skillfully conducted the Orchestra of St. Luke’s , which played with utter conviction. Much of the orchestral score was only for the strings; so extended period of the opera sounded more like a chamber opera. I was happy not to hear any electronic music or amplification of the kind that Adams had used in “Dr. Atomic.” He has plenty of great ideas in his music to communicate with the audience.

The stage direction by Peter Sellars gave the characters lots of movement and helped to tell the story fairly clearly. The costume design by Gabriel Berry was very colorful for the chorus and the narrator, but why did the prince and Kumudha wear blue jeans? At least Kumudha got to switch to more traditional Indian garb in the second half. The lighting seemed fine, but I missed the splashes of color on the floor of the stage (two elevated platforms) because of my seating.

It was also a relief to find out that none of the characters in this opera preached to the audience about how people ought to live (a message that plagued “Dr. Atomic”). In “A Flowering Tree,” the audience gets to ponder over the events of the story, and that’s part of the reason that this opera is one of Adams’ best.
Posted by James Bash at 4:54 PM

Thanks for the informative review! The music sounds intriguing even as a MIDI clip on Adams' website... I really hope to see this opera someday.

Let's hope that we get it somewhere out West - with Adams directing.