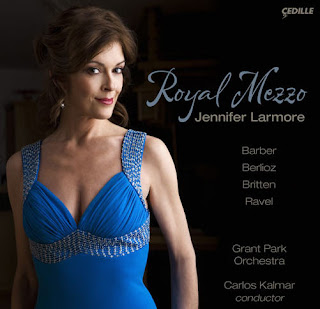 Jennifer Larmore has a gorgeous voice that she displays to wonderful effect in “Royal Mezzo,” an album released last year by Cedille Records. Containing secular cantatas by Barber, Berlioz, Ravel, and Britten, this recording is a treasure trove for Larmore, who soars to highest peaks and dives to the uttermost depths in each piece. In this musical journey, Larmore gives us insightful performances of privileged women who find themselves (with one exception) in tragic circumstances. In other words, there are no light-weight, frilly pieces in “Royal Mezzo.” This album is the stuff of grief and resonance. And Larmore, singing with the Grant Park Orchestra under the direction of Carlos Kalmar, combines rich timbre and urgency to get to the heart of each work.

The recording begins with “Andromache’s Farewell” by Barber. This cantata tells how Hector’s wife says goodbye to her son. After the Fall of Troy, the conquering Greeks wanted to make sure that Hector, the mightiest Trojan warrior, would have no prodigy to avenge his death. So they intend to cast the young boy off the walls of the city. Larmore sings passionately of Andromache’s frustration, anger, and ultimately her shame at not being able to help her son out of this predicament. Taken together with superb playing by the orchestra, Larmore delivers a performance that transcends time and place.

In Berlioz’s “La mort de Cléopâtre” (“The death of Cleopatra”) Larmore compellingly channels the defiance of the Queen of the Nile, who, though once the favored lover of Julius Caesar and Marc Anthony, has fallen into the hands of Octavian and cannot bear his disdain. Through Larmore, we can easily hear Cléopâtre summon all of her mental and physical strength before she relinquishes herself to her fate. The orchestral part often reminds me of the “Symphonie Fantastique,” and the overall effect of the music is grandiose and ultimately tragic.

Larmore and the orchestra create an elusive, dreamlike state with their performance of Ravel’s “Shéhérazade.” The music swims about in waves that rock gently back and forth, and the text describes fantastic images in distant shores. Lamore shapes her words with graceful sensitivity until the final notes dissolve and the imagery subsides and disappears.

To my ears, Britten’s “Phaedra” is the most challenging and interesting of the works on this album. Here is the dilemma of a woman who has fallen in love with her stepson. Yet the stepson does not feel the same way towards her. She consequently banishes him, and he is killed by a sea monster. In her remorse, Phaedra commits suicide by taking poison.

One of the most remarkable points in “Phaedra” comes when Larmore’s sings in her lowest register “I love you. Fool! I love you.” It’s the sound of a depraved woman who knows that she is trapped and cannot escape. But how can an almost guttural sound become the most haunting phrase of a tremendous piece of music? Well, with Larmore’s astounding singing, that happens. Give Larmore a tierra and a standing ovation.
Posted by James Bash at 11:10 PM