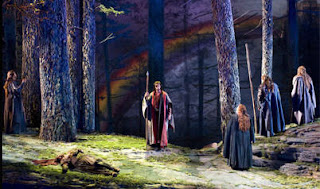 When the curtain goes up at the beginning of Seattle Opera’s production of “Das Rheingold” after the long orchestral introduction, the audience is plunged into the watery world of the mermaids who swim about in the Rhine River. I experienced this magical moment for the first time during Seattle’s “Ring” in 2005, and – based on the performance I saw on Monday, August 17th - it has not lost any of its luster. The three Rhine maidens, strapped in special harnesses that allowed them to swim in the watery light, dived, did front flips and back flips, and sang at the same time. It was mesmerizing.

Seattle’s Rhine Daughters (Julianne Gearhart, Michele Losier, and Jennifer Hines) sang splendidly and looked like they were having a lot of fun to boot. They used their fins to mercilessly tease Albrech (played by Richard Paul Fink) who in frustration renounces love and steals the pile of gold that mermaids were supposed to protect. Fink uses his voice to snarl and growl in such a way that he practically becomes the personification of evil. I found out from a lecture on the technical aspects of this production that Fink brings his own set of bullwhips which he, as Albrecht, unleashes over the heads of his Niebelungen minions to intimidate them and make them subservient to his will.

In “Das Rheingold,” the gods, led by Wotan, find themselves in crisis, because Wotan acted in bad faith when he negotiated with a pair of giants to build his castle, promising to pay them by giving them his sister-in-law, Freia. Since Frieia tends the golden apples that keep the gods young, the gods start to age and weaken when the giants haul Freia away. Wotan plans to offer them a pile of gold in exchange for Freia, and with the help of his demi-god friend Loge, he tricks Albrecht and steals the gold and an all-powerful ring. Albrecht places a terrible curse on the ring before Wotan gives it up as payment to the giants. Since they don’t know how to share the loot, one giant kills the other, and thus the curse of the ring rolls forward.

Seattle’s Wotan, Greer Grimsley, commanded the stage with his powerful bass-baritone and towering presence. Even when the orchestra roared at its loudest, Grimsley could easily be heard, and his acting worked seamlessly with Stephanie Blythe, who created a forceful Fricka, Wotan’s wife. Blythe is at the top of her game. Her voice could be steely one moment and velvet the next.

Marie Plette conveyed a vulnerable Freia, while Andrea Silvestrelli as Fasolt, and Daniel Sumegi as Fafner were totally domineering as the giants. Jason Collins as Froh and Gordon Hawkins as Donner were sturdy and forthright. Dennis Petersen created a memorable Mime (brother and slave to Albrich), and Maria Streijffert sang the role of Erda very well, although I would’ve liked more heft in her voice. Kobie van Rensburg’s Loge sparkled in the acting department, but his singing was Loge Lite.

I thought that the acting was tighter and done with more conviction by all of the singers than by the singers in the 2005 performance. Kudos to stage director Stephen Wadsworth for making these improvements. They really enhanced the performance and made the story more vibrant than ever.

The orchestra, conducted by Robert Spano, played well but didn’t take any chances. It seemed to me that the first horn that joined the low strings at the very beginning was a tad flat. I’m not sure why the Seattle production uses an electronic sound for the anvils of the Niebelungens. At least it sounded electronic rather than by the orchestra’s percussion battery.

The set design by Thomas Lynch has held up well and is impressive. The forest setting with the entrance to the cave that leads to Niebelungen-land is evocative of a mythic time and place. The hyper-realism of moss, trees, dirt, and stone are magical and greatly enhance the story telling. Designer Peter Kaczorowski also deserves the highest praise for his evocative lighting. I’ve seen a production in Toronto in which I could not tell who or what was singing at times, and that leads to a lot of confusion and even anger in the audience (when Canadians boo, you know that you’ve hit bottom).

All in all, this performance of Rheingold was great and got me excited about the hearing the next opera in the cycle, “Die Walküre.”
Posted by James Bash at 10:17 PM