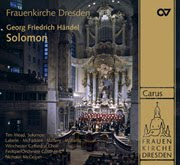 The German label Carus Verlag has released a series of recordings in recent years that together describe a sort of triptych of some of Handel’s great vocal works: they were all recorded by the FestSpiel Orchester Göttingen under the direction of Nicholas McGegan. Unlike the masque Acis und Galatea and the oratorio Samson, the chorus in this recording of Solomon is not the festival choir (the NordDeutschen RundfunkChor) but a guest chorus: the Winchester Cathedral Choir, an all male ensemble featuring boy sopranos and altos.

McGegan is a master at interpreting Handel’s work, and as usual he brings all of his formidable skills to this recording. The orchestra is spectacular and intuitive under McGegan’s hand, and is a pleasure to listen to into its own right. Never merely an accompaniment, it speaks with its own distinctive voice, adding as much to the narrative as any of the soloists.

The Winchester Cathedral Choir sings with a bell-like clarity, which is a great strength of boy’s choirs that yields so much pleasure in the listening. Diction is sometimes an issue with the chorus in this recording. Still, a spectacular blend and glorious sound make it easy to overlook this shortcoming. ‘Throughout the Land’ is an exceptional example; this passionate, delicate fugal chorus is just one of the shining moments to be found. The many uplifting choruses in this lengthy work are uniformly exuberant.

Baritone Roderick Williams proves a noteworthy vocalist. With robust, unforced power, he possesses a timbre which doesn’t demand attention—one simply pays it because of the grace and stature of the sound.

Tim Mead, an alto singing the title role is at times restrained, but not without richness. His delivery on the arias feels more sure and satisfying than the recitatives. A duet with soprano Dominique LaBelle as his Queen provides an intimate, languid look into the soul of the great monarch. A trio with Solomon passing judgment on the possession of the boy child yields a, delightful, nattering argument between the two harlots, sung by LaBelle and soprano Claron McFadden, who later sings the role of the Queen of Sheba. McFadden’s articulate ornamentation and full sound fit well the regal role.

Tenor Michael Slattery sings the role of Zadok the Priest. The first big aria for Zadok, ‘Sacred Raptures cheer my breast,’ is a true bear from a technical standpoint. Slattery renders the dizzying melisma with mixed results. Sometimes it is effluent; other times, especially lower in his register, the delivery is forced and lagging almost behind the beat. Still, this is a live recording, so a few moments lack the polish that would be found in studio release.

This recording is magnificent, and is definitely a worthy rendering of Handel at the peak of his brilliance as an oratorio composer. All of the recordings featuring McGegan with his FestspielOrchester have proven a delight to listen to, and one hopes that more will be forthcoming.

Posted by Lorin Wilkerson at 1:09 PM