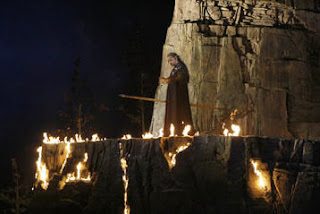 The performance of “Die Walküre” on Tuesday night (August 18) got off to a great start from the outset with the orchestra leading the way. The instrumentalists really came alive under the baton of Robert Spano and even got a little wild at times. Their playing may have inspired the singers as well, so that the audience got to experience a stirring performance.

Stuart Skelton superbly conveyed Siegmund as a fugitive and as a man inflamed with passion. Margaret Jane Wray’s Sieglinde convincingly embraced the all-consuming love for Siegmund and total fear of her husband Hunding. Andrea Silvestrelli with his imposing bass-baritone and intimidating demeanor created a truly frightening Hunding.

Greer Grimsley harnessed his voice to his acting to make an outstanding Wotan. There’s over a thousand bars of notes for Wotan in “Die Walküre,” but the amount didn’t seem to faze Grimsley at all. Just as in “Das Rheingold,” Stephanie Blythe was amazing as Wotan’s wife, Fricka. This time she often had to argue some sense into her husband’s head; so Blythe’s voice often had an edge. And her lowest notes were the best of all, because each word she sang seemed drenched with extra meaning.

As Brünnhilde, Janice Baird started out singing cautiously, but she gradually freed up her voice, showing no signs of the vocal distress that apparently plagued her last week. Some of her acting seemed a bit stilted, but she was wonderful as the favored warrior-daughter of Wotan. After her betrayal of Wotan’s command, Brünnhilde made a fervent case for her actions, yet had to submit to his punishment. With Baird lying on the ground between two large stones and Wotan commanding fire to encircle her, the final tableau was striking.

Again, the acting in this performance seemed a lot more polished and convincing than in the 2005 version. Wray and Silvestrelli showed great timing when she was mixing the drink for him and had to look down at just the right moment when Silvestrelli turned around. Of course, it was timed to an accented place in the music, but that made it even better. The lighting also was perfect, and Hunding’s house with the intertwined branches of the world ash tree enveloped into its roof was a fantastic creation. The only thing that went wrong happened when Wotan’s spear got clobbered by the swords of Siegmund and Hunding. They ended up bending the end of the spear, and it looked like a piece of it broke off.

Of well, if everything went right, it wouldn’t be live opera.
Posted by James Bash at 6:28 PM