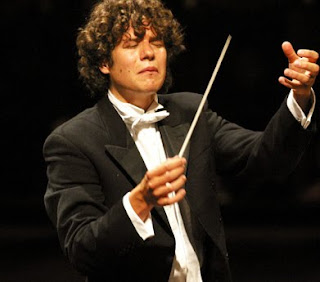 Who would’ve thought that there’s an up-and-coming conductor with a mop of Gustavo Dudamel-like hair who is younger than Dudamel himself? Well, the 26-year old Robin Ticciati is just such a fellow. Starting this fall, Ticciati begins his first season as principal conductor of the Scottish Chamber Orchestra. Since 2007, he has been the music director of Glyndebourne on Tour and has already conducted several top-tier orchestras in Europe and has become the youngest conductor at La Scala (in 2005) and the Salzburg Festival (in 2006).

At this summer’s Mostly Mozart Festival at Lincoln Center, Ticciati made his U.S. debut with the Orchestra of the Age of Enlightenment, a highly-acclaimed period ensemble, which Ticciati has already conducted. The performance took place on Sunday (August 16) in the afternoon at the newly renovated Alice Tully Hall, and the all-Mozart program featured pianist Robert Levin in the Piano Concerto No. 22 (K.482).

The concert opened with “Les petits riens” (“The little nothings”) (K.a10), which consist of short ballet pieces that Mozart wrote as a 17-year-old. Musicologists have not determined how many of the pieces – other than the overture – were really Mozart’s, but in any case, Ticciati and the orchestra began this 16 minute work with a loud splash of sound. Some of the pieces were tender and slow while others were rambunctious and fast. One of the numbers featured some exceptional flute playing by Lisa Beznosiuk and Neil McLaren. A barnyard-like dance number made its appearance near the end before the piece closed with a piece that sounded much like the overture.

Next on the program came the piano concerto with Levin playing a fortepiano. I learned from Levin’s pre-concert lecture and recital (Mozart’s Sonata in D major, K.576) that the fortepiano was a copy of a Haydn piano that dated back to 1795. This piano uses knee levers instead of pedals and was tuned in unequal temperament.

Levin played the concerto with characteristic precision and excitement, and the orchestra showed plenty of enthusiasm as well. However, due to the lack of volume from the fortepiano, its sound got completely buried by the orchestra whenever they were going at full tilt. Of course, when only parts of the orchestra played or when Levin had an exposed solo section, then the piano could be heard clearly, and it sounded marvelous. I enjoyed the exuberance that Levin brought to this piece, but he is a bit of a ham when he took his bow at the end. Maybe that’s the way that Mozart would’ve done it… or maybe not.

After intermission the orchestra played Mozart’s Symphony No. 40 (K.550). I thought that the Ticciati and the orchestra showed its best hand with the last movement, because they kept the music interesting with lots of interesting pacing and changes in volume. Some of the other movements were not nearly as intriguing. It was as if the orchestra and conductor used most of their rehearsal time to go over the fine points of that fourth movement and sacrificed the earlier ones. I should add that the horns, played by Roger Montgomery and Martin Lawrence, were truly outstanding throughout the piece. The audience (which filled the hall to capacity) rewarded the orchestra and conductor with sustained applause, so the concert was a success or at least mostly a success.
Posted by James Bash at 4:29 PM

Don't you think that Levin played the fortepiano with too hard a touch, creating a harsh sound, and running everything together?
Also, if the fortepiano had been placed in front of the orchestra, with the keyboard to the left, as is the current norm with modern pianos, the sound might have projected better, especially with the lid on and up, again as with modern pianos. If the fortepiano placement was an attempt at authenticity, as it was placed in Mozart's time, it does not make much sense as Alice Tully Hall holds probably 10 times as many people as an audience at the end of the 18th century

I don't know enough about fortepianos to say for sure that his sound was too harsh. I've heard him on DVD and the concert hall experience at Alice Tully sounded similar to that. I suspect that you are right in thinking that the placement was similar to Mozart's time, and that the size of hall defeated that idea. Thanks for your comments!