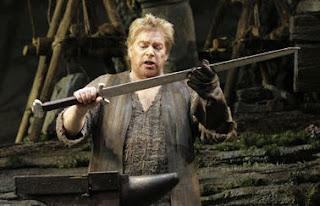 Although last week, Stig Andersen suffered from a viral infection while performing “Siegfried,” I had the fortune to hear him in tip top shape during the Seattle Opera performance on Thursday, August 20th. Andersen, in the title role, put on a real show for heldentenor fans by offering plenty of volume while maintaining a lyrical tone at the same time. Adding to his vocal fireworks, Andersen expressed the exuberant vigor of a young man who was naïve yet curious about the world. Andersen also did wonders with singing while making a sword the old-fashioned way, slaying a dragon, and going through fire to find Brünnhilde. So, Andersen carried most of the weight that made Seattle Opera’s production of “Siegfried” a hit.

Another big factor for the success of this production was the fine singing of Janice Baird in the role of Brünnhilde. With this performance, Baird demonstrated that she had strongly bounced back from a subpar showing during the first cycle. Her soprano was focused and secure, and her Brünnhilde convincingly accepted Siegfried as the hero who awakened her from her lengthy sleep (surrounded by fire on top of a mountain).

Other very strong performances were turned in by Greer Grimsley as the Wanderer, Richard Paul Fink as Alberich, Dennis Petersen as Mime, Daniel Surmegi (behind the coulisse) as Fafner, and Maria Streijffert as Erda, and Julianne Gearhart (also behind the coulisse) as the Forest Bird. It seemed that Gearhart’s voice was amplified, which distorted it somewhat to my ears. I wished that she could have sung from the orchestra pit. (Note: I've been informed that Gearhart did sing anamplified from the orchestra pit. Still, I thought that her tone sounded odd.) Petersen had the character of Mime down to perfection, and the scene in which Mime revealed his true intentions toward Siegfried was terrific.

Besides creating a supremely diabolical Albrecht, Fink showed some terrific athleticism. At one point, instead of running up the first switchback that goes up the hill, he planted his left hand and vaulted himself perfectly to the next level of the switchback. I also liked how Siegfried threw rocks at Fafner’s tail; that was especially fitting for a young gun.

One of the great things in this production is the use of misdirection. In football, misdirection is employed by the offence to trick the defense into thinking that a play will go a particular direction, but it actually travels in another direction altogether. In this production of “Siegfried,” the audience saw the opening of a large cave and some segments of the Fafner’s tail, But although the tail moved and Siegfried playfully wrestled with the end of Fafner’s tail, the dreadful head and gapping mouth of Fafner appeared from another part of the mountain wall. So first-time audience members were almost ready to scream at Siegfried to warn him of his impending doom.

I really liked the naturalistic look of the big, rock wall, the cave, and the switchback path up the hillside. The lighting, designed by Peter Kaczorowski, was flawless. Again, the stage directions by Stephen Wadsworth seemed to be improved over the 2005 version. And with Andersen as the impetuous and courageous hero, this production of “Siegfried” was a gem.
Posted by James Bash at 9:51 PM