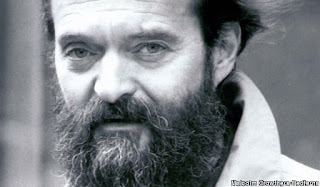 Few contemporary composers have discovered a new style that has depth, presents challenges for the performers, and has garnered a measure of popularity among listeners, but Estonian composer Arvo Pärt has accomplished all these things. Pärt’s distinct musical style, called tintinnabulation, was put on vocal display in a concert by Cappella Romana on Friday (August 7) evening at St. Philip Neri Church.

The concert program, entitled “Arvo Pärt: Odes of Repentance,” consisted of selections from Pärt’s Orthodox works arranged in the form of a “service of supplication.” This service, sung Church Slavonic by the Cappella Romana without instrumental accompaniment featured odes from Pärt’s “Kanon Pokajanen” (“Kanon of Repentance”), as well as his “The Woman with the Alabaster Box, and selections from his “Triodion.”

In tintinnabulation, the notes of a triad are maintained in slow arpeggios or drones while other voices unfold melodies on the notes of the scale. Because Pärt writes most of his music to religious texts, some critics refer to tintinnabulation as “holy minimalism.” Yet even though Pärt works with a sparse number of notes, the total effect – with the voices of a high-caliber ensemble like Cappella Romana – much larger, thicker, and ultimately mesmerizing.

This was a very demanding concert: over an hour’s worth of singing by an ensemble of seven men and seven women who did not take a break to drink some water. Conducted by artistic director Alexander Lingas, the ensemble used a straight tone (no vibrato), kept the blend in equal proportions, and built terrific crescendos. The singers created moments that pulsated and others that conveyed utter calm and restfulness. Sometimes the men had the drone and at other times the women had it. The basses executed notes that sounded almost subterranean at times (like on the word “burial” in “The Woman with the Alabaster Box.”). The sopranos soared to the highest peaks several times, including a fitting “that our souls may be saved” in “Ode 3” near the end of the concert. I think that I heard a wobbly note here and there, but, all in all, this was an outstanding performance.

At the beginning of the concert, when Cappella Romana’s executive director (and one of the ensemble’s baritones) Mark Powell introduced the concert program, I thought that the nave of St. Philip Neri would have far too much reverberation, but because the ensemble stood very close to the front row of listeners and the amount of hang time for each tone was absolutely perfect. The church was filled to capacity, and after the last note died away and Lingas lowered his hands, the ensemble received long, sustained applause from an audience that seemed to appreciate every note as well as the words of repentance.
Posted by James Bash at 5:56 PM

It is perhaps worth noting that the word 'tintinnabulation' refers to the sound made by the ringing of bells so I imagine that is the effect Pärt is trying to achieve. I thoroughly enjoy his music and together with Morten Lauredsen (another of my vocal fave's) believe he provides some of the most approachable and moving choral music of any contemporary composer.