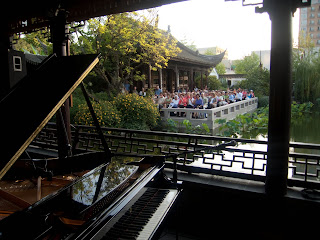 It would be difficult to find a better setting for the new Chinese pieces that pianist Susan Chan performed on Tuesday evening at the Chinese Classical Garden in Portland. The lush foliage, still waters of the big pond, and graciously curved rooftops of the traditional buildings in the Garden seemed to enhance the pieces that Chan chose for the second half of her program. She played very atmospheric works by Doming Lam, Somei Satoh, Alexina Louie, and Tan Dun, and it was easy to go along with the impressionistic sounds of each piece. Chan's sensitive playing of these works were interrupted by noises from airplanes, trucks, trains, fire engines, and loud pedestrians. But none of these sounds derailed Chan's performance at all. In fact, it seemed that she was enjoying them as a sort of accompaniment.

It looked as if around 200 people attended the concert, which featured almost an hour's worth of pieces from Western composers in the first half. Chan played works by César Franck (arranged by Harold Bauer), Frederic Chopin, and Franz Liszt. I sat behind and to one side of the piano for this part of the program, and I'm sure that I didn't get the full measure of Chan's performance. The numbers by Bauer and Chopin became a little too soft, and the Liszt needed more fire. But I think I didn't receive the full sonic effect of what Chan was playing. So, after the first half ended, I moved to a much better location that took advantage of some speakers. That's why I left the Garden with a wonderful impression of the Chinese pieces.

Chan has released two albums of music on the MSR Classics label and has established a reputation for interpreting music from the Orient and the Occident. If you get a chance, you should hear Chan on these recordings. To replicate the experience of hearing Chan in the Chinese Garden, you just have to get the music on your iPod and visit the Garden at your leisure.
Posted by James Bash at 10:17 PM

Okay, you're gonna make me feel an idiot here - but I thought the first piece was by Cesar Franck, no?

It was an arrangement by Bauer of César Franck's piece.

I'll make the correction. Thanks!