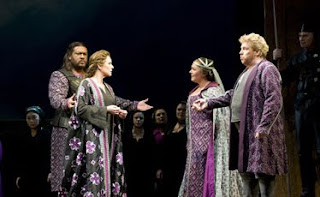 Janice Baird’s Brünnhilde made Seattle Opera’s “Götterdämmerung” a triumph at the performance I heard on Saturday, August 22nd. Baird captivated the audience with her soaring voice and committed acting. She showered sparks all over the stage when Brünnhilde vainly tried to prove that she was Siegfried’s wife. During those moments Baird’s soprano had an edge that cut through the orchestra and connected almost viscerally with the audience.

There were numerous outstanding scenes in this performance by the entire cast, but one of the most effective ones came when Brünnhilde swore on edge of the spear; there was blood all over the palm of her hand and the audience audibly gasped. The use of blood for Brünnhilde contrasted well with bloodless exchange when Siegfried (Stig Andersen) and Gunther (Gordon Hawkins) pledged their oath on a spear. It was as if the guys weren’t men enough to draw blood, but that Brünnhilde was completely fearless.

Another terrific scene in this production involved the Rhine Daughters (Julianne Gearhart, Michèle Losier, and Jennifer Hines) who come to the surface of a pond (or the edge of the Rhine River) and try to get the ring from Siegfried. The mermaids cavorted and sang impressively and constantly moved as if they were bobbing along in the water.

The opera opened with the three Norns (Luretta Bybee, Stephanie Blythe, and Margaret Jane Wray) up against the wall. It was eerie and fascinating to watch them interpret the rope of destiny.

Stephanie Blythe did double duty as a Norn and as Waltraute, the Valkyrie who tried to convince Brünnhilde to give the ring back to the Rhine Maidens. Believe it or not, during the Waltraute- Brünnhilde confrontation, Blythe’s voice seemed to show signs of fatigue. So she is human after all.

Richard Paul Fink’s sneering depiction of Albrech was superb and matched up well with Daniel Sumegi’s disturbing and haunting portrayal of Hagen.

Hawkins’ voice seemed to improve as the opera went along, and Andersen was almost as sterling as he had been in “Siegfried.” Marie Plette was suberp as Gutrune, and the rollicking chorus added wonderfully to scenes at the Gibichung castle.

Expressive playing by the orchestra, under the direction of Robert Spano, contributed greatly to the success of this performance. One of the many highlights came during the emotionally charged music after Siegfried’s death.

So, three operas ago, a story that began with the taking of gold and a building contract negotiated in bad faith concluded with the demise of Valhalla and the return of the gold to its original owners. On many levels this story and its music still speak to us today.
Posted by James Bash at 1:39 PM