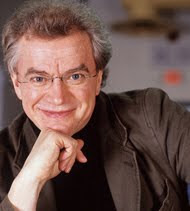 It might have been the weather outside Avery Fisher Hall that caused the all-Beethoven concert with Osmo Vänskä and the Mostly Mozart Festival Orchestra to ignite yet not catch fire. New York City was in its first week of 90 degree weather and absolute humidity, and the air conditioning at the concert hall was running at full blast on Saturday evening (August 15). But even without the heat, Vänskä, who is the music director of the Minnesota Orchestra, displayed the energy of a conductor half his age with furious stickwork, and the orchestra responded with urgency in a program that consisted of the Overture to “Coriolan” (Op. 62), the Symphony No. 8 (Op. 93), and the Piano Concerto No. 4 (Op. 58) with the dashing Russian guest artists Vevgeny Sudbin. The end result was a “Coriolan” that needed more dynamic contrast between pianissimos and crescendos, a piano concerto in which the orchestra wasn’t as crisp as it should’ve been, and a Beethoven 8 that should’ve got the audience off of its feet, but didn’t .

I’m wondering if the placement of the orchestra was partly too blame. For this concert, the instrumentalists sat on a stage that extended into the hall. As a result, part of the audience could sit in risers on the stage behind the orchestra and to either side of it. So even though I sat midway to the back of the main level of seating (orchestra level), I left the concert wondering if I had missed out on the excitement of the concert. This concert marked Sudbin’s orchestral debut in New York, and he did play very well. In fact, he made the music look easy and never overstated his ability with affected gestures or glances at the audience (a la Lang Lang). I heard bravos and some of the audience did stand for him, but listeners didn’t just jump to their feet. On the other hand, perhaps Sudbin’s publicists didn’t hype him enough.

I would like to hear Sudbin again, and experience Vänskä’s conducting as well. Vänskä seems to garner rave reviews wherever he conducts; so this concert with the festival orchestra struck me as slightly off his mark.

Finally, I noticed that the concertmaster of the Mostly Mozart Festival Orchestra was Kyu-Young Kim. Kim is a member of the Daedalus Quartet, which played at Chamber Music Northwest a few weeks ago.
Posted by James Bash at 9:07 PM